There are many (2c) possible continuous mappings of [0,1] onto the boundary of the Mandelbrot Set, but the one which is most useful is based on the orbit dynamics. The binary decomposition entry shows how it is computed.

Denominators of the Form 2N-1 : External Angles of Cusps and Bond Points

If a rational external angle is expressed as a fraction A/B, the values of the numerator A and denominator B yield useful information. Of particular note, if the denominator is 2N-1, the external angle leads to the root (a bond point or cusp) of a mu-atom of period N. Every root has two external arguments except the cusp of R2 itself, which has one (although it can be expressed by two equivalent values, 0/1 and 1/1). 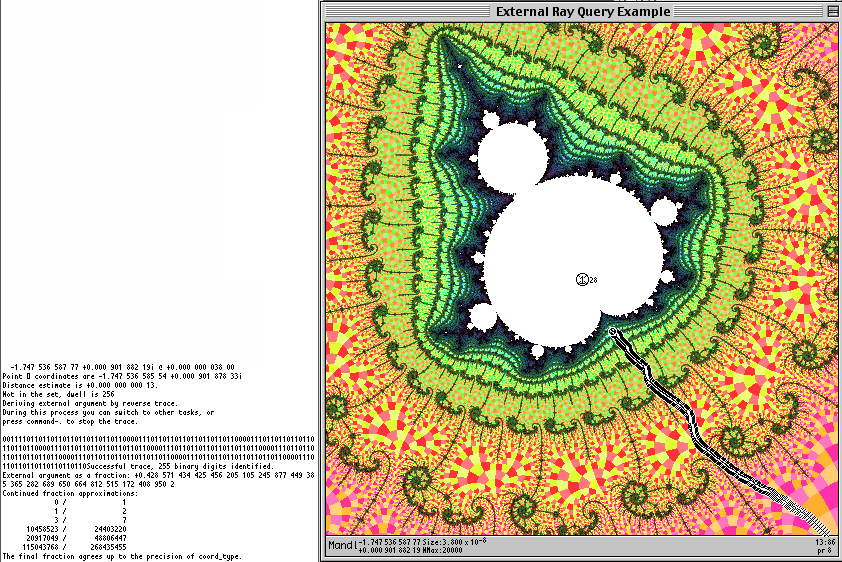 The above image shows the application of algorithm to trace the path to a cusp of a mu-atom of a given period N. Such algorithms typically require N bits of precision in all calculations, even when the mu-atom in question has a size much larger than 2-N; see accuracy.

External Angles with Other Denominators

An external angle can be used as a name for the corresponding point on the Mandelbrot Set's boundary. This has an advantage over more complex naming systems in that a computer can automatically find a feature given its name. However, such names cannot be used easily by humans without the aid of external-angle software.

External angles are often used as part of a more elaborate naming system; in the R2 system they are used in the filament subset operator. 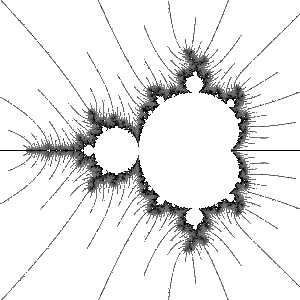 Here is a table giving the corresponding FS operators in the R2 Naming System:

From the Mandelbrot Set Glossary and Encyclopedia, by Robert Munafo, (c) 1987-2022.     Mu-ency index
This page was written in the "embarrassingly readable" markup language RHTF, and was last updated on 2011 Feb 14.