Since 2007 I have worked on Orrery designs using LEGO elements. This began when I looked at the NASA Kepler Mission website and found their educational material including a miniature tabletop "solar system" designed (in 2004) to demonstrate how the Kepler mission will work.

I liked their model so much I decided to work on a few improvements, then began developing my own completely new designs.

As this "page" has gotten rather long, I have broken up the material into a few pages, organized chronologically (oldest first).

Script for the model A movie

Script for model B2 movie

History: Previous Versions of the Orrery

My 2004 designs are descended from versions by Allan Ayres and Dave Koch. The first two were 2-planet and 3-planet designs by Ayres. I know little of the 2-planet version, but I suspect it was like its successor but without the middle planet.

Here is a picture of the 3-planet design; the building instructions for it are here: transitdemo.pdf. 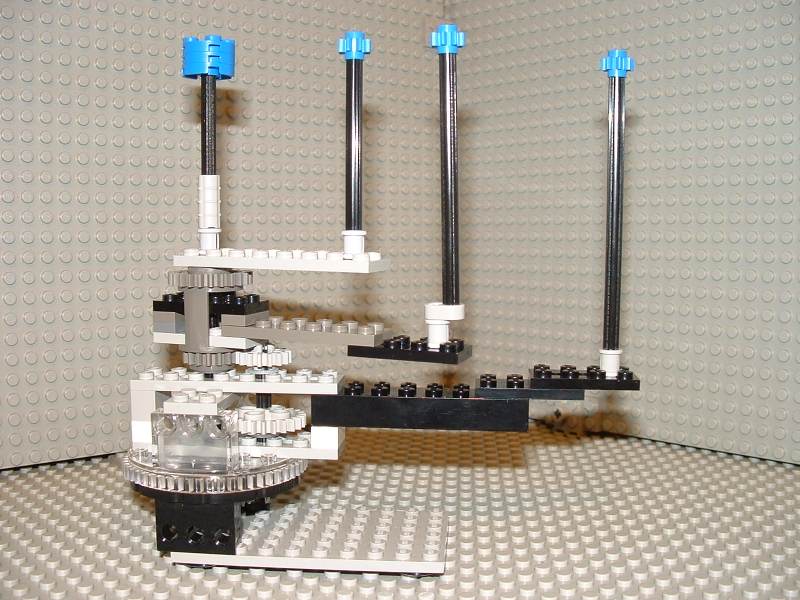 A large Technic turntable, whose base remains fixed, is made to turn through epicyclic gearing. 4 rotations of the inner shaft makes the turntable top rotate once. The 3rd planet is attached to the turntable, and the 1st planet to the central shaft. Another gear on the turntable makes the 2nd planet turn at a rate twice that of the 3rd.

The orbit period ratios can be measured easily just by turning the crank a few times. Here are the periods; I have also shown a "radius" computed by the formulas discussed here.

These orbital periods might seem a little artificial, but it does actually happen in real life — Jupiter's moons Io, Europa and Ganymede have exactly this ratio of periods, due to orbital resonance. You can approximate their orbits by setting up the model so that the 1st and 3rd planets are aligned and the 2nd is all the way around on the other side:

You may notice in the above 3-planet designs, there is a gear on the upper part of the differential housing that doesn't come into contact with any other gear. That gear provides an opportunity to add a fourth planet, and Dave Koch did exactly that. He took Ayres' 3-planet design and modified it to look roughly like this: 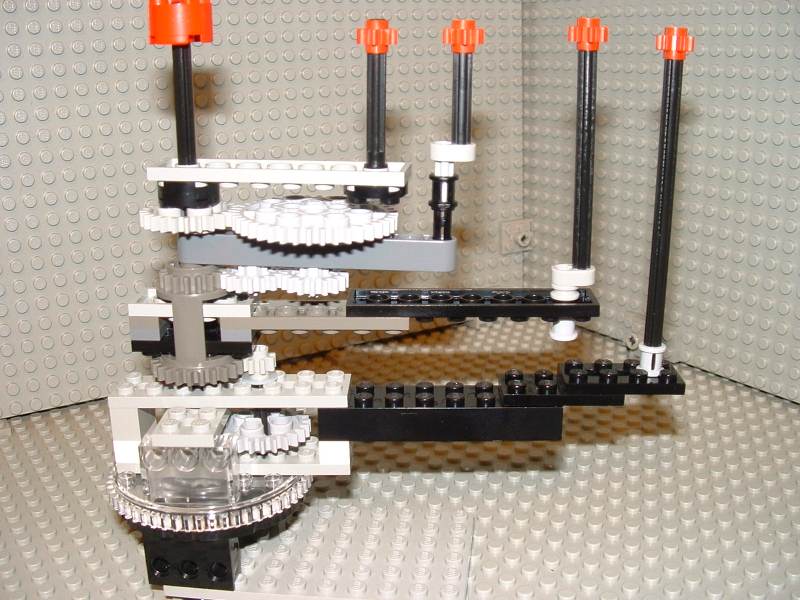 B1. My Rendering of the Ayres/Koch 4-Planet Orrery (without moon)

(Here, I have added half-stud adjustments to make the planet distances more closely conform with Kepler's 3rd law (discussed below).)

Then he added a moon:

The instructions to build this model are here: The Kepler Transit Demonstration

To make the model more accurate, one should adjust the lengths of the arms so that the planets' distances are related to their orbital periods by the formula

P is the orbital period,
a is the semimajor axis of the orbit (the radius, for a circle)
G is the universal gravitational constant
M and m are the masses of the sun and planet

for our purposes we can simplify it to

where K is an arbitrary constant, which can be 1 if you express P and a as multiples of one planet's period and radius. So for example, knowing that Mars has an orbital period 1.88 times that of Earth, the formula tells us that its semimajor axis is 1.882/3 {~=} 1.523 times that of Earth.

All of the models above (A and my versions of B) are built with the proper distances to within ±2mm.

B's orbit periods are a bit more complex than A's. The turntable turns the same way as before, through epicyclic gearing. 12 turns of the crank make it go around once. This is one orbit of the 4th planet. 36 turns of the crank is the time it takes the 4th planet to orbit 3 times. In this period the 3rd planet orbits 4 times, the 2nd planet orbits 7 times, and the innermost planet orbits 12 times. I call this a syzygy cycle because if you start the orrery with all planets aligned, it takes this long for them all to become aligned again.

Here is a table showing the planet orbital rates and periods, and the radii used in Koch's model (K) and my two models (M1 and M2):

The number 7 in the above ratios might come as a bit of a surprise, if you consider that the gears (with 8, 16, 24 and 40 teeth) cannot by themselves produce any ratios involving the prime number 7.

The 7 (and other prime factors in the more complicated ratios below) comes from epicyclic gearing formulas that involve addition and subtraction, and division of ratios.

Consider first the drive of the 4th planet: 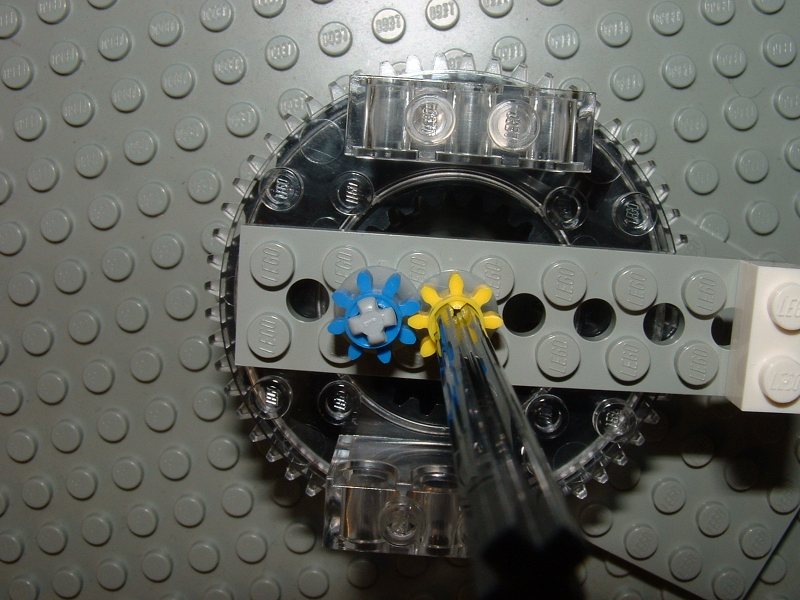 It is easiest to compute the gear ratio from within the rotating reference frame of the planet. Relative to the planet, the base is rotating at -Rp and the sun is rotating at Rs - Rp. The base has 24 teeth, the sun has 8, and the planet acts as an idler gear. Because the base's gear is inside-out (teeth facing in) a direction reversal is added. The gear ratio is -1×24/8, or -3/1. Therefore, the motion of the planet-carrier and sun will fit the following formula:

and therefore (by algebra)

This shows that the 3rd planet in model A will revolve once for each 4 times the 1st planet revolves.

Now consider the transfer of motion to the 3rd planet: 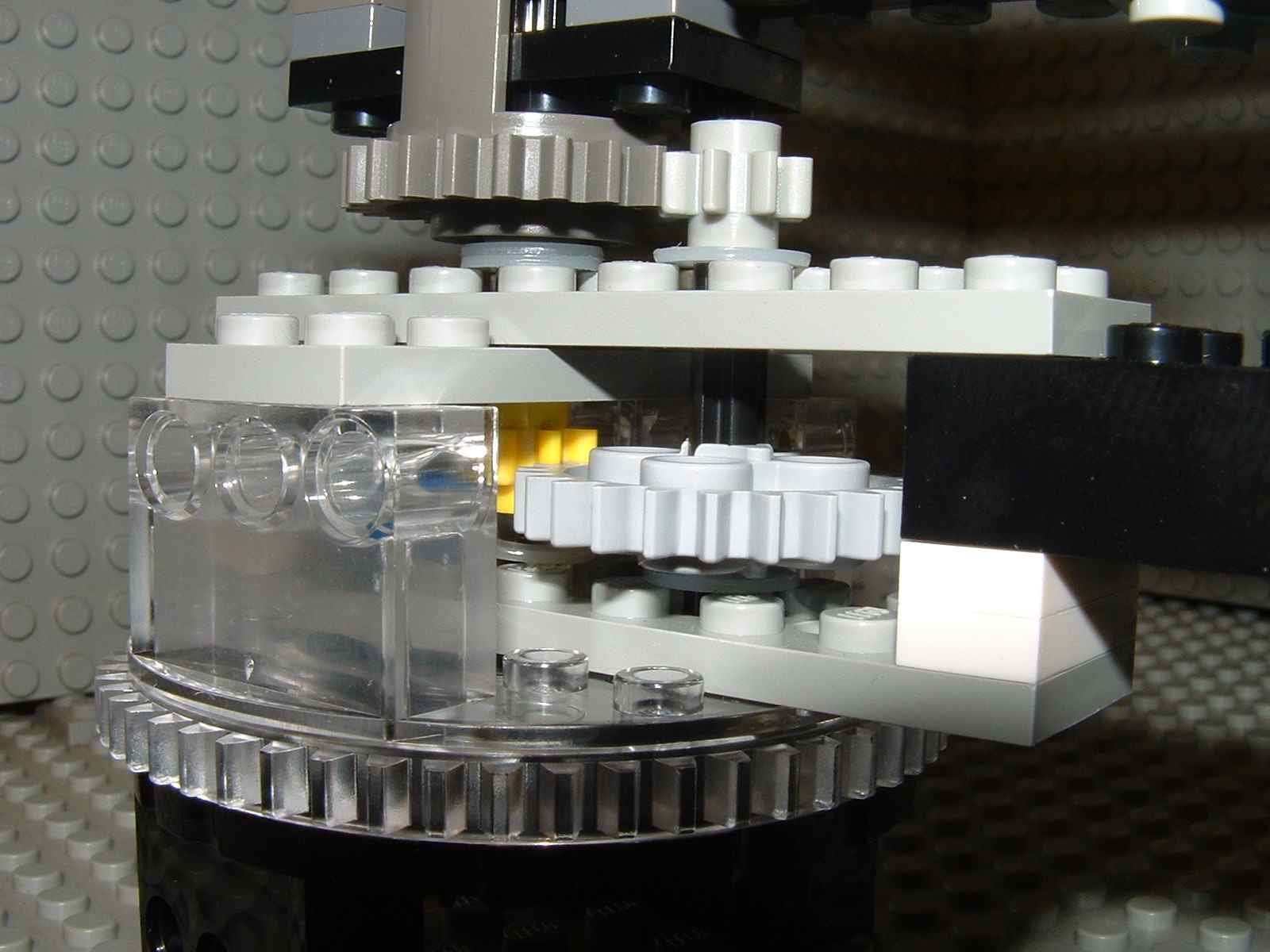 B2 Transfer from 4th to 3rd

Still a fairly simple ratio, no strange prime numbers here. But let's see what happens when we go up to the 2nd planet: 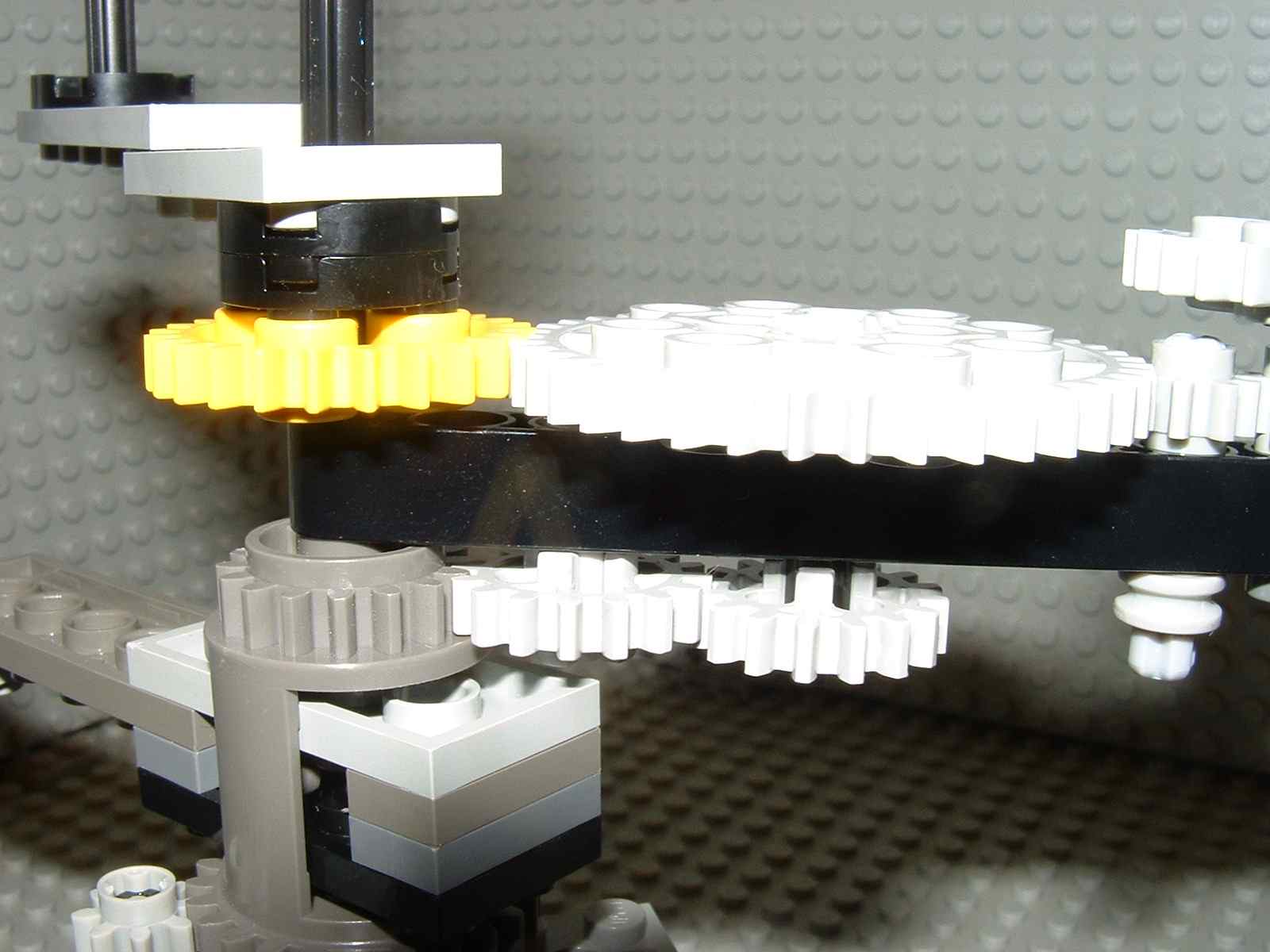 Which gear is the input? We already know that R1 and R3 are determined as just described. Therefore, they are both inputs, and R2, the 2nd planet's arm, is the output. The equation reduces as follows:


This page was written in the "embarrassingly readable" markup language RHTF, and some sections were last updated on 2020 Mar 26.