After getting 5 planets I added moons again to planet 2 by the gearing shown for B2. The next-best candidate for adding moons was planet 5; this required a reworking of its arm.

Rather than using Technic beams or plates, the 5th planet's arm is a pair of Technic axles joined at periodic intervals by 3-unit liftarms to maintain spacing and rigidity. These axles support the gears via piece 6536. The advantage of this system is that it allows gear axles to be spaced at whatever distance you want, which allows using arbitrary combinations of gears, not just pairs whose teeth sum to a multiple of 16. This in turn makes a huge variety of geartrain ratios available.

The 5th planet's arm supports a large number of gears and some chain (used mainly just to reduce weight a little). At the end of this is the following: 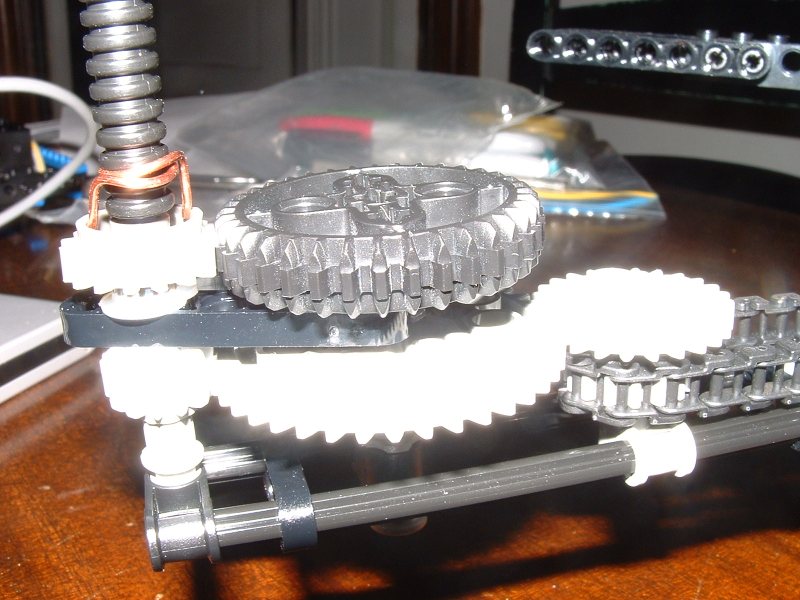 40- and 36-tooth gears drive 12- and 16-tooth gears, respectively. In place of the normal Technic axle, the 12-tooth gear is mounted on a blue section of flex system hose. Around this is a piece of black ribbed hose and the 16-tooth gear, which can turn freely. The small piece of copper wire you see holds the two together so that when the gear turns, the hose turns with it.

In the 5-planet design, the orbital periods get quite complex. As described above, it takes 56 turns of the crank to make the bottom turntable (and the 5th planet) orbit once. This is considerably slower than the 12 turns it took to make the 4th planet orbit. However, in the 5-planet design, the inner 4 planets move a bit faster, because their base is turning. If you turn the crank 12 times, the 4th planet makes a bit more than one complete revolution. 12 turns now takes it about 1 1/6 revolutions. However it has not quite caught up with the 5th planet — viewed from the (rotating) reference frame of the lower turntable, the 4th planet has only gotten about 90% of the way around. The slow movement of the bottom turntable cancels out some of the effect that the central vertcal drive shaft has on the upper turntable. It takes 12 2/3 turns of the crank for the 4th planet to overtake the 5th by a full lap.

Three times this period is the time between syzygys — you now need to turn the crank 38 times to get the planets to line up again. But, they are not pointing the same direction — they are about 115 degrees away (17/53 of a full circle, to be exact). It takes 52 more syzygys (53 in all) for the planets to end up in their original position.

The ratios of the orbital periods relative to each other remain the same. So, in the 38 syzygy period, the four inner planets overtake the 5th planet 12, 7, 4, and 3 times respectively — and as seen from the 5th planet's point of view, the 2nd planet's moon orbits 52 times.

Before making the arm more sturdy, I replaced most of the gears and the chain drive with a radial axle and two pairs of bevel gears.

I rebuilt the arm for the 5th planet to be much more sturdy. This entailed re-doing the drive train for the 5th planet's moons yet again. I also decided to replace the copper wire and flex tubes with rigid parts — however, it uses one essential part, part 4442, that LEGO hasn't made for over 10 years: 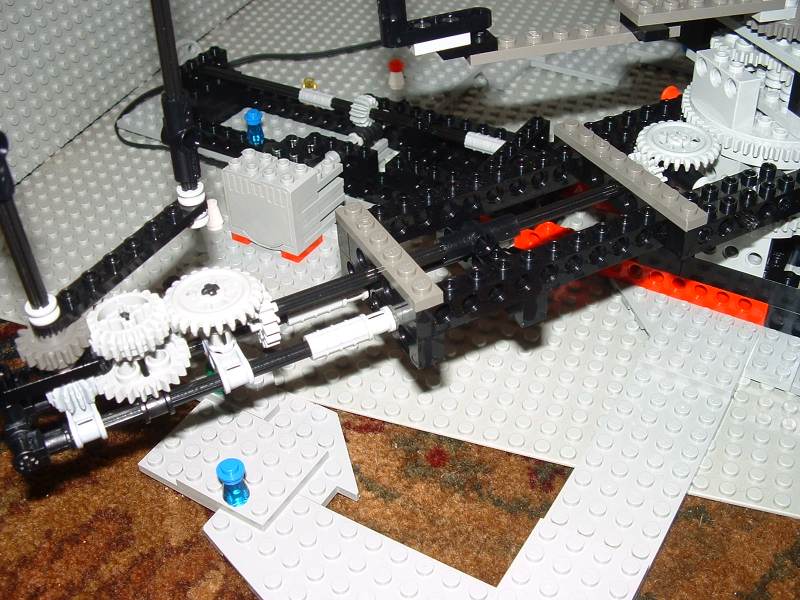 The first few 5-planet designs use two turntables stacked one on top of the other, as seen here.

There are many ways to build an orrery, and most all of them have been explored in detail within the Meccano hobbyist community. An indispensable resource is "Michael Whiting, "Orrery Developments: The Use of Meccano in Constructing Planetaria" by Michael Whiting [2]. It shows more techniques than I had ever heard of including a couple that seem to utilize the turntable better than I had done thus far.

Inspired by this, I took a break from my main effort to research an adaptation of Whiting's "Method 2" to drive more than two (specifically, anywhere between 3 and 5) stacked turntables from geartrains located below the bottom-most one, each at rate independent of the others, and with most of the gearing nicely hidden away in the base. This picture and video explain:

I will be exploring the capabilities of this idea later; it should allow orreries of 6 or 7 planets, all with moons and each orbiting at an arbitrary rate.

{The experienced artist-engineer Alex Allmont [3] has implemented something similar to this in his "Music of the Gears" project. There are three turntables, two of which are driven by axles that go up through the middle of all three turntables and are driven at independent rates; the third is driven by its outside gear edge as I did when I added the 5th planet. -RPM 20121223}

After getting E to work well I decided to try to make my work more useful to others, and better suited to the Kepler group's purpose (a classroom demonstration: motor-driven, built from readily available parts, with a fixed budget, etc.).

That meant re-designing the orrery from current LEGO sets, preferably at the lowest possible cost. I ended up choosing Off-Road Truck (set 8273) and Motor Box (set 8287). The truck supplies the turntable and the structural elements; Motor Box has a lot of gears, the differential housing (part 6573); the z16 clutch gear (part 6542) and driving ring (part 6539); and of course a motor; all of these are essential parts for meeting my goals.

After building the truck to ensure all the pieces were in the box (-: I quickly rebuilt it into model F shown here: 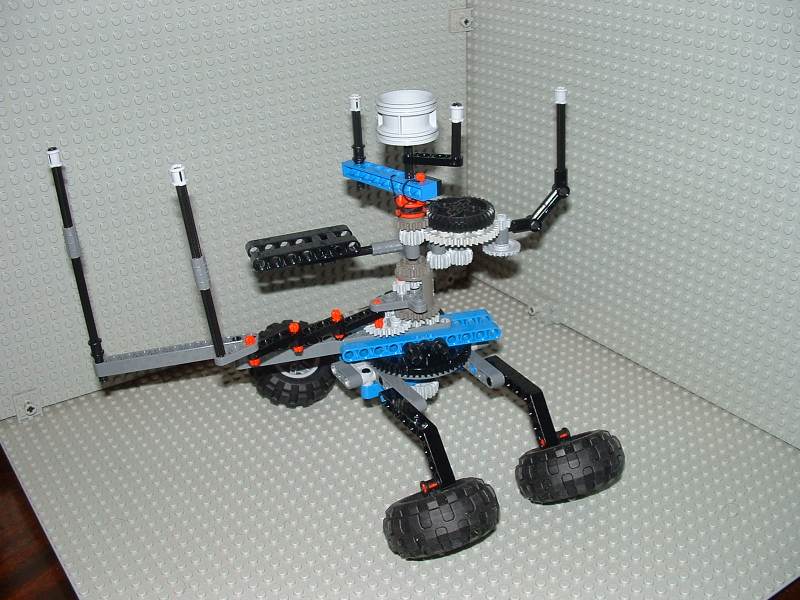 The tires are being used as non-slip rubber feet, and another wheel is being used to represent the sun.

This model uses a different technique to add a 5th planet. Rather than adding the new planet outside (and below) the 4th as was done in models C, D and E, this version adds a planet between the 1st and 2nd. This is done by adding an open-center z16 gear (part 6542) just above the 2nd planet arm and making that arm turn it.

The more challenging part of this was to get the z16 gear to turn an arm to which a planet can be attached. It was done through the bizarre (yet legal to LEGO-purists) method shown here: 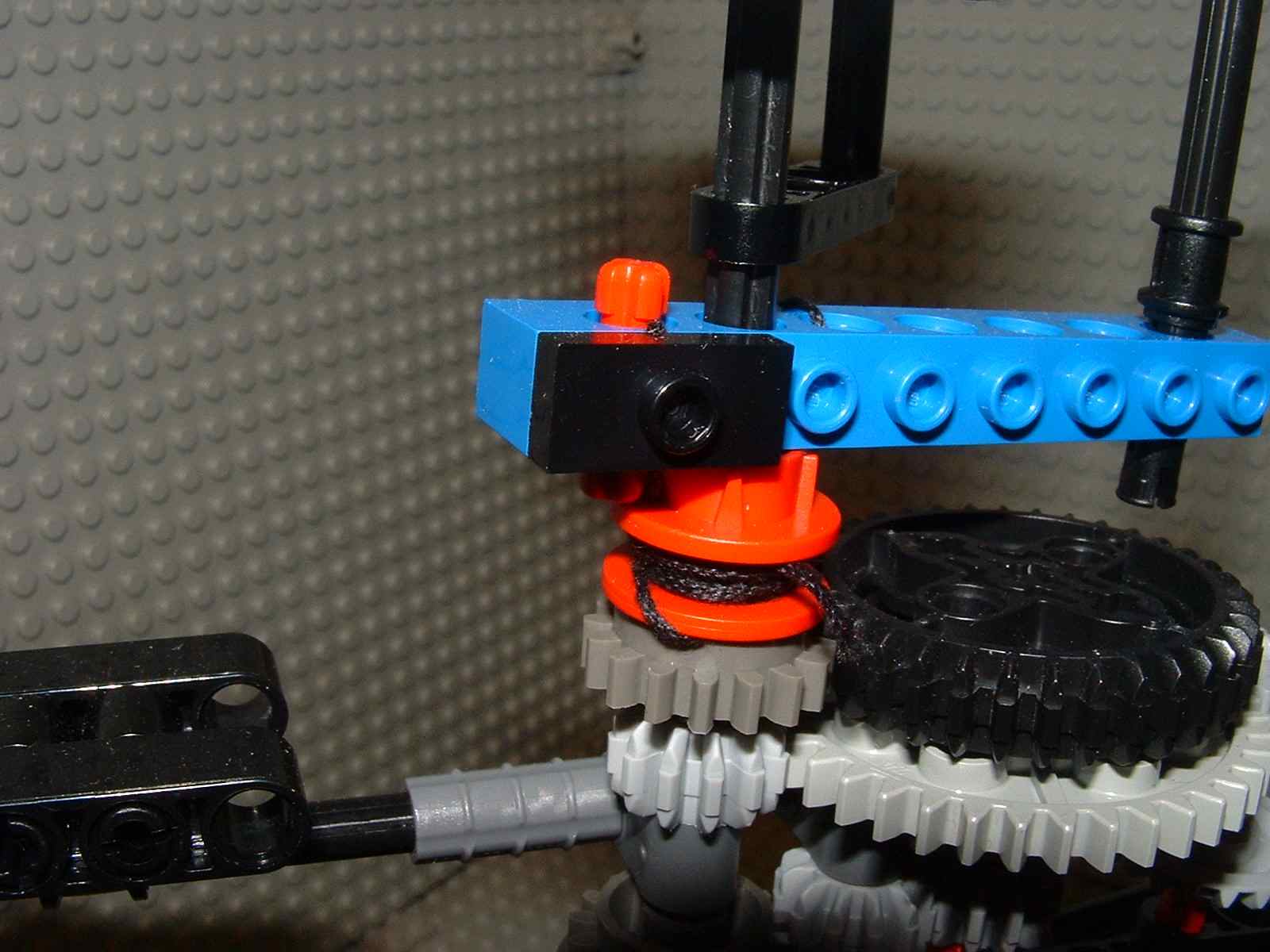 After getting the basic 5-planet motion working, I began to add moons and other refinements. I call this version G: 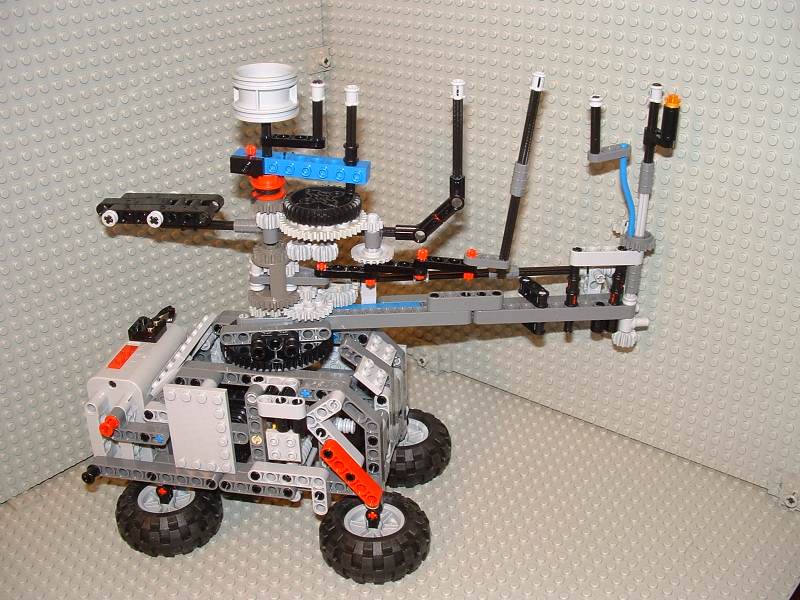 G. Interim Version with Some Moons

This version incorporates the following improvements: 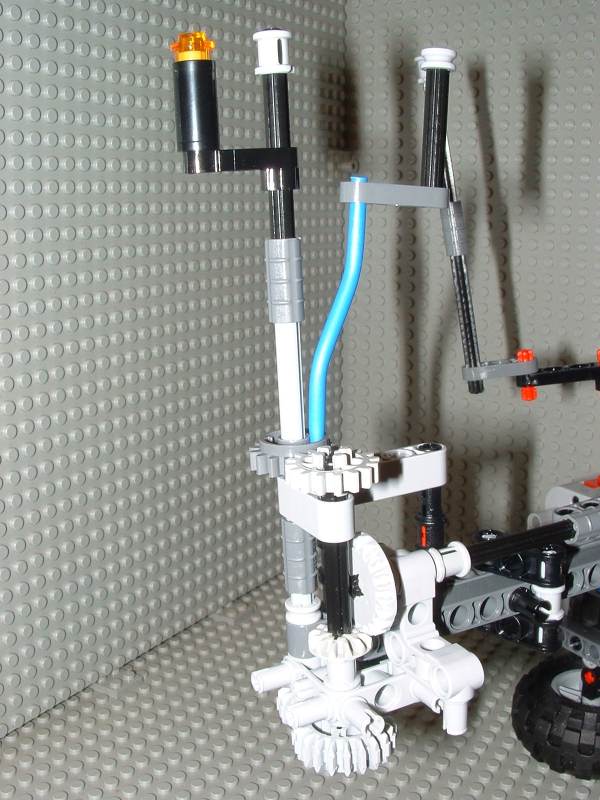