I added a moon to the 2nd planet, but with different gears from the one by Dave Koch. This picture shows it well: 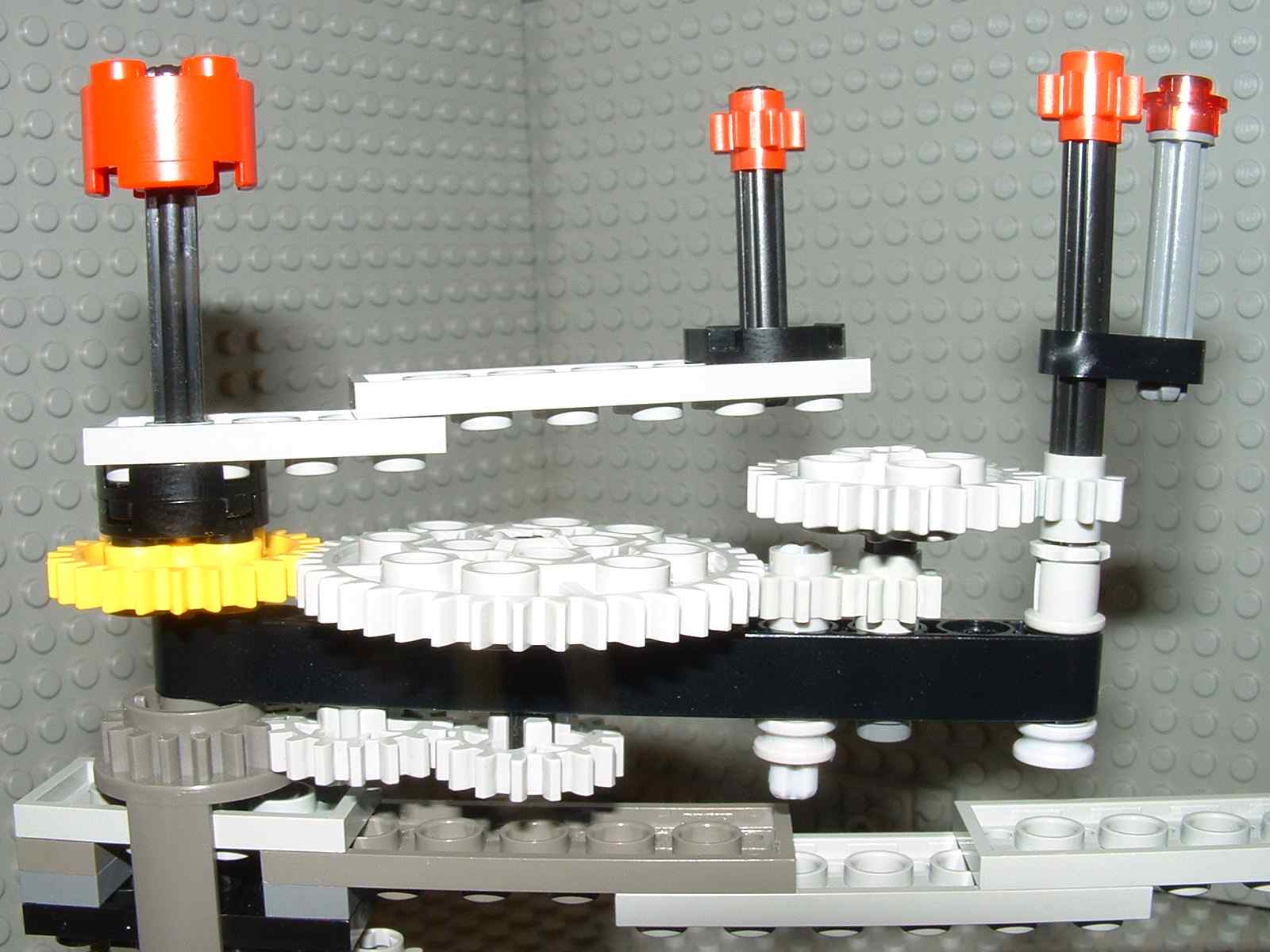 Let's calculate the moon's orbital rate. Again we should work from the (rotating) reference frame of the 2nd planet. The geartrain ends out at the little 8-tooth gear. We have a choice as to where we say the geartrain starts — it could start at the sun gear, or at the dark gray gear attached to the 3rd planet's arm — either way, we'll end up with the same answer.

Let's say the geartrain starts with the sun gear. We'll use Rm as the moon's orbital rate. From the 2nd planet's point of view, its rate is Rm-R2. The equation is:

To explain this in words: The moon is driven off the difference between the 1st and 2nd planet's orbital speeds, with a 9× speedup from gearing. So, every time the 1st planet overtakes the 2nd, the moon has orbited the 2nd planet 9 times as measured against the sun (it will have gone through its phases 9 times). During a full syzygy cycle, the 4th planet orbits 3 times, the 2nd 7 times and the 1st 12 times. So, during this period, the 1st planet overtakes the 2nd 5 times. The gearing therefore produces 5×9 = 45 lunar months. To this we add 7 because the 2nd planet has orbited the sun 7 times in that period — so from the outside point of view, we see the moon orbiting 52 times per syzygy cycle.

These new prime numbers arise from the addition or subtraction that takes place when you transform from the rotation speeds in the reference frame of the gear-carrying arm, and that of the outside observer. This is how, using gears of 8, 16, 24 and 40 teeth, all multiples of 2, 3 and 5 — it is possible to transform 32×22 turns of a crank into 7 rotations of one thing and 4×13 rotations of another.

C: The first of my 5-Planet Designs

The Ayres/Koch designs are innovative and work fairly well, but I felt it could use some refinements. Right away, I balanced all but the innermost planets by adding counterweights. This eliminated the sagging problem and also makes it look a lot cooler when it's running (-:

I also noticed there was a turntable with nothing being done with the gear teeth on its outside edge — the drive was going in entirely through a single central axle. I was pretty sure this could be exploited in some way.

(A side note for builders: I felt free to use parts from my entire LEGO collection, including parts that are not available now except through used-parts dealers. I call these "freestyle" designs. I started to feel I was cheating, I own 15,000 LEGO parts. So, after making a few freestyle designs to explore ideas, I limited myself to two sets costing $80 total and a mere 850 parts to choose from. The first of these "constrained" designs is here.)

My first freestyle design was version C. It was short-lived; I did not bother to take photos. Its 5 planets all had arms similar to those of the B versions and no moons.

In the Ayres and Koch versions, the turntable is fixed to the model's base. The top part of the turntable, including the teeth on its outer edge, is moved by the epicyclic gearing.

But the turntable could be put on a rotating platform (such as another turntable) and rotated in either direction. If the central shaft is driven as before, it will make the top of the turntable turn relative to the bottom, and all of the parts above it will move as well.

Here is how I made the second turntable rotate (photos taken from version D): 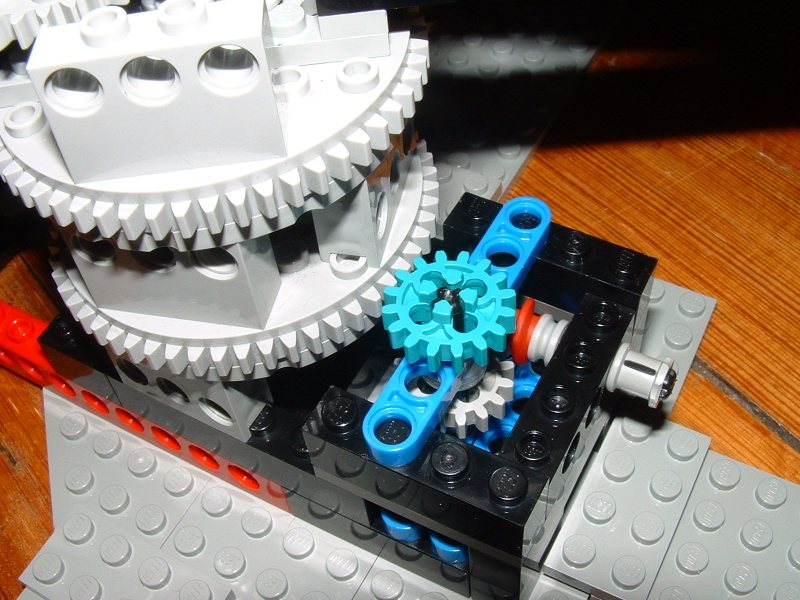 And here is the base with the turntables removed to show what has been added: 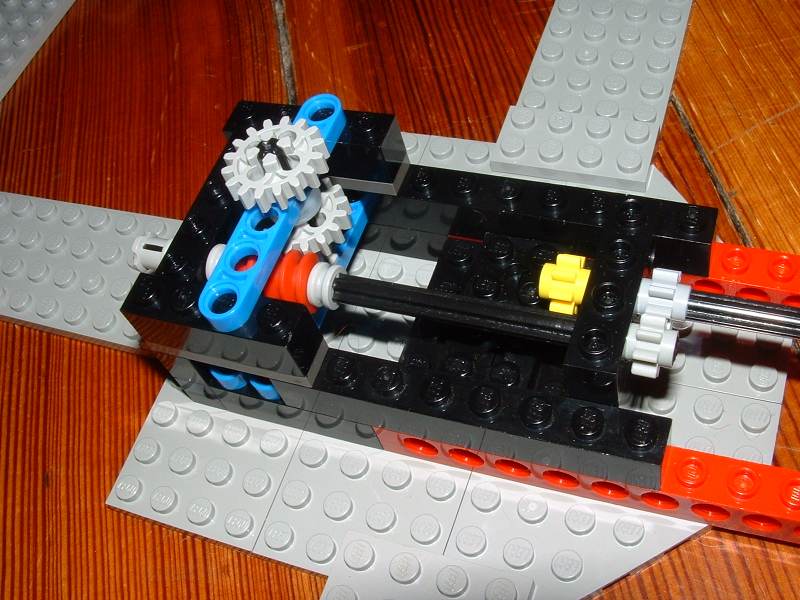 The hand crank turns the long horizontal shaft coming in from the right. It ends with the yellow gear, which drives a 24t crown gear attached to the central vertical shaft that goes up to the sun and first 4 planets. Through the pair of gray z8 gears, it also turns a second shaft; this shaft has a worm gear (shown in red) that turns a z16 on a small vertical shaft; a second z16, the one most clearly visible in the above photo, turns the turntable. This gearing means that it takes one turn of the crank for each tooth on the outer edge of the turntable, or 56 turns for a full revolution. This is about 5 times slower than the 4th planet arm.