After getting a tip from friends at Phi Tau I registered for and attended Boston's version of BarCamp, 2012 April 7th and 8th, at sponsor Microsoft's New England Research & Development Center.

The BarCamp conferences are a weekend of peer-run workshops on the interaction of technology with human culture. Unlike most such conferences, BarCamp's workshops are scheduled mere minutes before it starts. Joey deVilla's blog post shows the process in action (at the previous year's conference) and generally conveyed the experience so vividly that when I arrived I felt like I was returning for the second or third time.

What might sound like a lecture on technology and/or the history and culture of BarCamp was actually just a few minutes of organizational announcements, which was about all it took to get things going.

We moved to the floor with meeting rooms and had a mostly full schedule board within perhaps 20 minutes. @Lisa03755's blog shows the process quite well.

11:00 Introduction to the Heroic Path

I have a great interest in human personality and was wearing my human archetypes periodic table T-shirt, so I felt it would be appropriate to join this session. I sat in the back and was a bit unsure if I should contribute, not being an expert on the presenter's focus topic — but soon understood that it was okay and this conference was quite welcoming and amenable to audience contribution.

Lisa (@Lisa03755) had planned to do this session together. I planned to offer an introvert's counterpoint to her focus, which was inspired (at least in part) by Dorie Clark's HBR Blog article It's Not a Job Search, It's a Permanent Campaign.

The diversity of participants made for a great discussion, which went in many directions without getting off track or being over-dominated by any particular "side" in the debate. Many issues came up, with competing interests and no clear or simple answer for all. In particular:

A nice mix of novices and long-term experts discussing one of my favorite topics, how to make your own electronic gadgets. The Arduino system is seemingly equivalent to BASIC Stamp with which I was already familiar, but is gaining a lot of ground apparently due to its completely open-source nature and a faster, easier-to-program programming language.

The popular uno version the presenter demonstrated with is physically bigger than the typical BASIC Stamp but the nano is closer to what I'm used to. Both are programmed through USB and maintain their programming in flash memory with an auto-bootloader so your program comes to life when reconnecting the USB or a battery.

Last year's "mountain of pizza" returned, and @tim_wong's pic shows some of the remains.

I tried (without a projector, alas) to show off some of the cool things that we can do now with reaction-diffusion patterns. There are dozens of scientists making cool art and dozens of artists doing cool science without even trying. 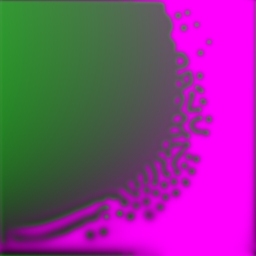 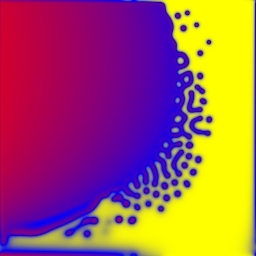 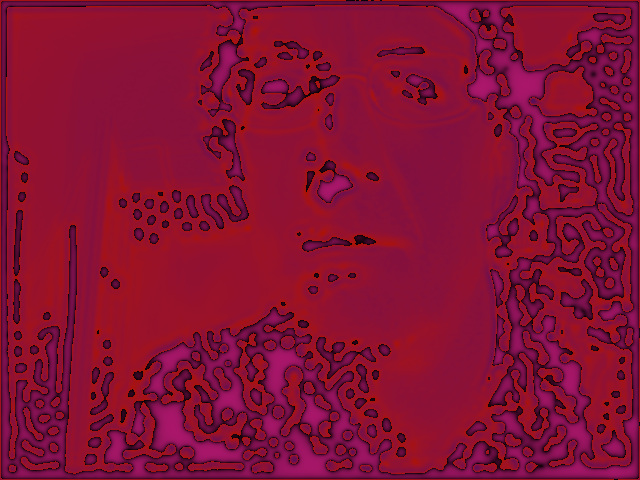 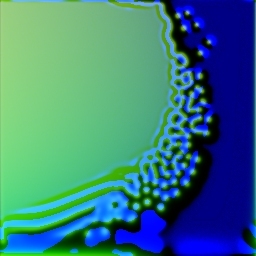 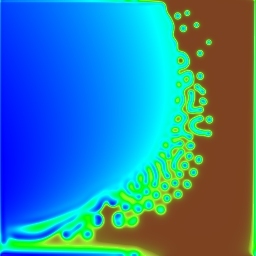 These patterns require a lot of gigaflops to generate, and I recommend you don't try it unless you're using the graphics card (through something like Processing or Apple's Quartz Composer, see my screen savers) or are ready to do some hardcore High-performance computing programming in a language like C++. But there are programs like the new open-source Ready project and even online Java applets that let you get right into exploring.

I think this stuff has the potential to dethrone Conway's Game of Life as the ultimate demonstration of Artificial life via Emergence from basic physics. I led a session on this question the following day.

I was a little late but still felt able to participate in this discussion, which was more of a debate about the tradeoffs between complexity and versatility of competing approaches to hobbyist hardware hacking, and less of a how-to session.

The presenter had sketched the KIM-1 from memory on the whiteboard, and I used my iPad to bring up Wikipedia's photo of the KIM-1 within a minute:

In the days of the Kim-1 I read an article from The Futurist describing the dator, what we now know as the Internet-connected tablet device. I've now gotten so used to using dators that I didn't even notice the irony (or whatever) of what I had just done with a KIM-1 photo on an iPad.1

Throughout the two days of BarCamp I frequently found myself learning about the topic more quickly by using Google on the iPad than by listening to the discussion, and I wonder if it's like that now for students.

I was glad to be able to spend some time with folks who, like me, didn't know a hashtag from a mention, along with a few who could share ideas about innovative uses for Twitter and ways to make itconvenient and managable.

Just as the title sounds, this was a step-by-step tutorial on the basic language features of the interpreted programming language Python, suitable for anyone who had at least a little programming experience in any other language.

I learned that the indentation and the "mysterious" % operator were the only things that had kept me from realizing that Python is essentially the same as 2 or 3 other languages I use all the time.

As one of the few ground rules of BarCamp, we were invited to move whenever we felt we would be learning or teaching more elsewhere, so I dropped in for a bit in two different sessions during this time block:

Robots Are Awesome! — Let's geek out about them.

and then got to talking in the hall, forgetting that the next sessions were beginning...

The essential idea is to use techniques similar to Biofeedback to use one's musical performance skill as a tool for solving mathematical problems.

That's about as well as I think anyone could do at describing this in words, but it made a lot of sense (without words) when we saw the live demonstrations.

The presenter has plenty of of material on his YouTube channel, diproton, much of which is relevant to the topic of the BarCamp session. (And he knew me from my website before we met, which is a pretty rare and pretty cool thing when it happens :-)

I got a bit to eat, but at this point was far too tired to go on. I typically work all night and last night had been no exception — so I left pretty soon and got ready for the next day, not even bothering to check any email or send tweets.

The first fellow attendee who met me for this session answered "yes!" citing himself and me as two examples. I had to clarify the question, to wit:

Can two-dimensional patterns, such as those that are formed by biological processes like fingerprints or zebra stripes, also manifest universal computation capability?

The patterns shown on my Xmorphia website and viewable in programs like Ready are quite diverse, and while assembling the images and movies on the Xmorphia site, I discovered a region that displays at least as much variety as Conway's Game of Life. In addition to big empty regions and masses of chaotic movement, you can also get stable patterns that stay still, move, rotate, and/or travel on a curved path, and a few are look okay for a while but turn out to be eventually unstable:

I looked very carefully at these phenomema and discuss them in a scientific paper and a talk I gave a couple years ago.

Here at BarCamp I wanted to have a more general discussion on the topic, without getting too specific or focused on "my particular system" but using it as an example to illustrate what I was talking about.

In "my system" as well as in Conway's Game of Life, there are a variety of "moving object collisions" that produce different sorts of results, depending very subtly on the initial placement of the moving objects that collide. We discussed how one might eventually try to put these bloblike things together to make a more elaborate mechanism, and I pointed out how the molecules in living cells are dealing with chaotic movement all the time, yet still manage to conduct a vastly complex industry and produce orderly results.

The page you are reading right now was created with RHTF, a system of my own devising. If you inspect its HTML and CSS you will see that it is extremely simple, and few clicks over at the Wayback Machine will show that my pages have pretty much looked the same for well over ten years.

So I had a bit of an awkward start in this session that was best suited for folks who need to seriously consider which of two strategies they should use:

There are many detailed issues and techniques to handle them, but in my opinion the most useful tools are of two types:

11:20 Music Discovery and Analysis with The Echo Nest API

I love services like Pandora Radio and Apple's iTunes Genius features for discovering music, and the various $5 per month on-demand services let you listen to most anything you might want to discover — but to me it has always seemed like we could do better. I was attracted to this session mainly for the potential benefits of developing new ways to discover music that you'll probably like.

In addition, the echo nest also seems to offer the potential of presenting the music you already own (and also available streaming music, if you have a streaming service) in ways that take maximum advantage of what is available and that make it easy to satisfy changing moods.

I would guess that SpotOn Radio (review here) comes a lot closer than anything preceding it, but we've still got a ways to go...

At this point I just took a break from the structured sessions for a while and talked with a few people.

1 : KIM-1 : Adjusted for inflation, the iPad is less than 1/3 the price, and my iPad 1 successfully runs both the 6502asm.com and visual6502.org JavaScript 6502 emulators. The latter arguably surpasses the KIM-1 in that you can see the entire 512 bytes of memory all at once, and you can watch every transistor in the 6502 going through every voltage transition.


This page was written in the "embarrassingly readable" markup language RHTF, and was last updated on 2015 May 17.