I presented some of the material from my 2009 paper, and a few of the more interesting videos from the xmorphia exhibit to the Mathematics department at Rutgers University as part of their Fall 2010 series in Mathematical Physics.

Here are the slides in two formats, Powerpoint and Adobe PDF:

The PPS and PDF versions contain extensive graphics and links to the videos I prepared for the talk (which are on YouTube). Some software (e.g. PDF plug-in or a PPS viewer) might not be able to jump to the links directly, but you can cut and paste the URL text (example: "youtube.com/v/kXDTqqgrYCg") into your web browser's address bar.(The same links are also in the slide text below)

In addition to the videos linked from the slides, the participants also saw the videos from the following pages in my main Gray-Scott web exhibit: 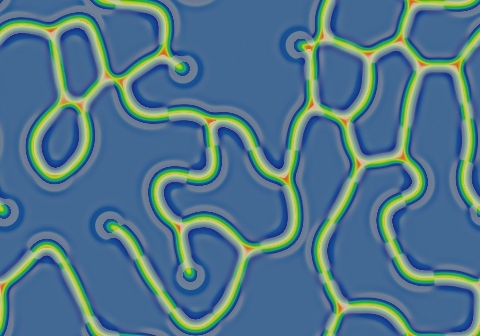 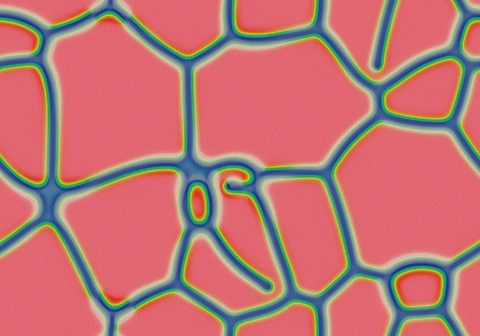 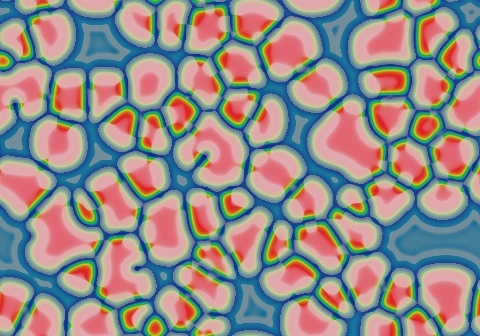 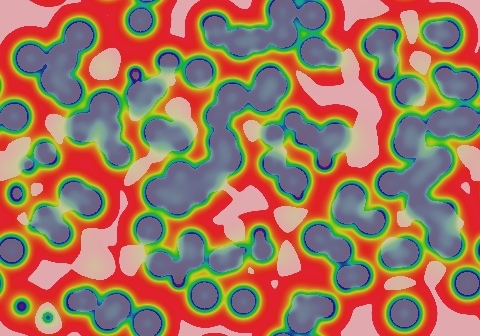 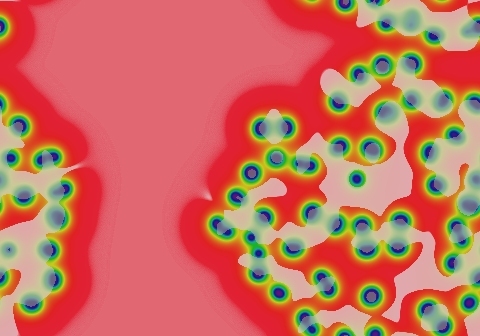 What follows is the text of each slide with links to the relevant images and videos. This is intended for readers with a slower connection, or who prefer to go to the YouTube videos directly from the browser without the need to download the slides.

Stable moving patterns in the 1-D and 2-D

Contents (outline of this talk)

(showing part of fig. 1 from Lee et al., and their form of the PDE formulas) 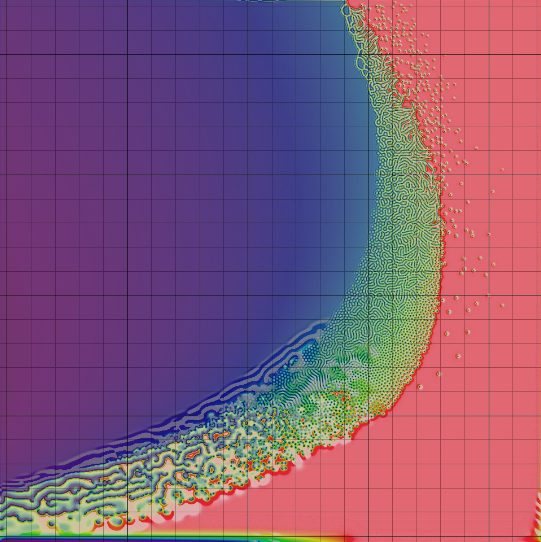 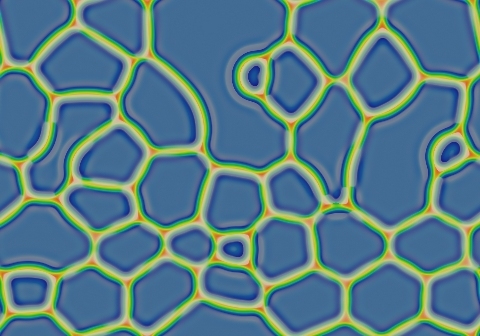 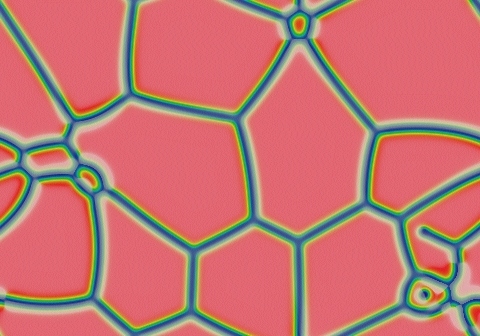 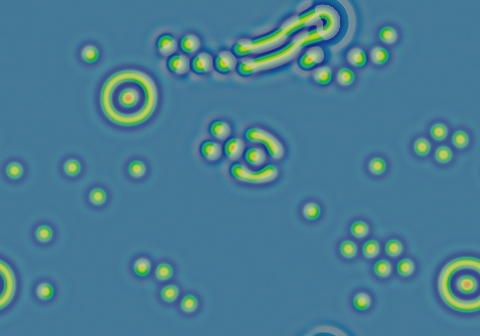 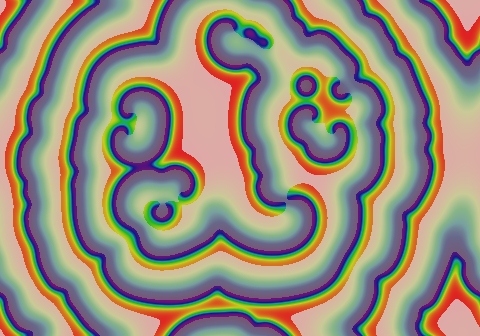 (The above 4 images have arrows pointing to a copy of the parameter map image from the previous slide, and showing the locations of the k and F values for each image) 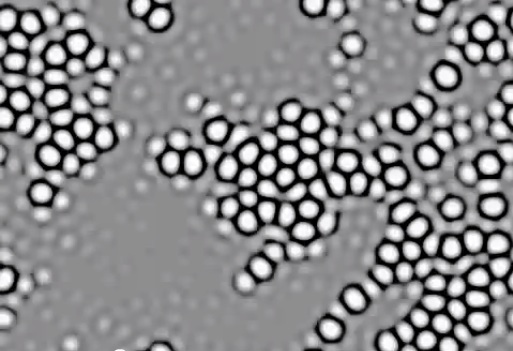 How can we trust these results?

- Quantify the sensitivity of these pattern phenomena to precision, randomness, reaction parameters and other environmental conditions

My diagram illustrating the effects of "precision", "noise" and "randomness" on the robustness of pattern-forming phenomena

This is an abstract (qualitative conceptual) representation of two different types of phenomena that affect pattern-forming systems, viewed as "dimensions" or "parameters" of the laws of physics.

Q represents the amount of quantization that results from the (finite, not infinitesimal) size of atoms. This determines the relative strength of brownian motion and other similar phenomena.

N represents the amount of aberration resulting from numerical methods — roundoff error, the choice of a certain finite grid size to represent a continuous system, etc.

The other letters represent the location of certain pattern-forming systems that have been studied in published work:

O : Other published Gray-Scott simulations over the period 1994-2009

L : Stochastic simulations, such as certain papers by Prof. Joel Lebowitz of the Rutgers mathematics department.

The vertical dotted line represents one author (Munteanu et al. "Pattern formation in noisy self-replicating spots" Int'l. Jrl. of Bifurcation and Chaos 12(16) 2006) who added various amounts of "Gaussian noise" to a simulation and observed a substantial qualitative change in pattern type (from stripes to spots) as one goes from zero noise up to a level one might expect in real-world experiments, in Gray-Scott simulations with k=0.0655, F=0.05 and all other details as in Pearson (ibid. 1993). I have reproduced these results in my simulations.

Note that these "systems" exist in different types of "reality" : the physical reality of the world around us, the "virtual reality" inside a computer, and the "abstract" existence of mathematical truth. For this and other reasons, there are many more than just two "dimensions" at play and so the chart above is just an illustration of the concept.

U-shaped pattern moves at about 1 dlu per 62,000 dtu (dimensionless units of length, time)

(two-spot pattern): Movement is 100% spurious: measurements should tend towards zero

(U-shaped pattern): If real, velocity should clearly converge on a nonzero value

Limits on parameter k (when F=0.06) for stability of U-shaped pattern 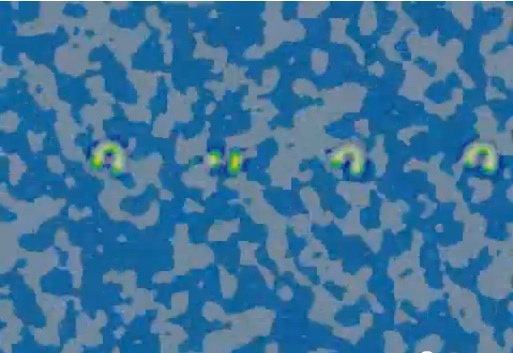 At noise level 0.064, three patterns are destroyed; noise amplitude is then diminished to initial level 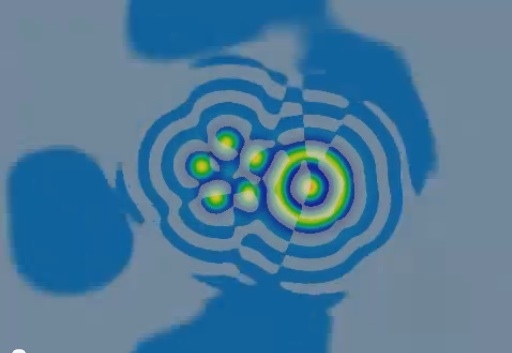 Two sets of three noise events; noise event amplitudes are 10-5, 0.001 and 0.1; pattern allowed to recover after each event

Coloring (left image) same as before

Coloring (images below): white = positive dU/dt, black = negative dU/dt, shades of gray when magnitude of dU/dt is less than about 5×10-13 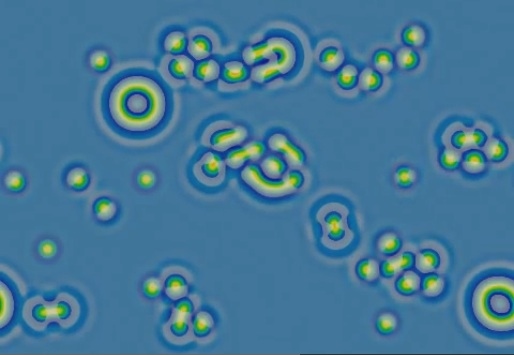 Initial pattern of a few randomly placed spots of relatively high U on a "blue" background (secondary homogeneous state, approx. U=0.420, V=0.293)

"Pattern ι is time independent and was observed for only a single parameter value." 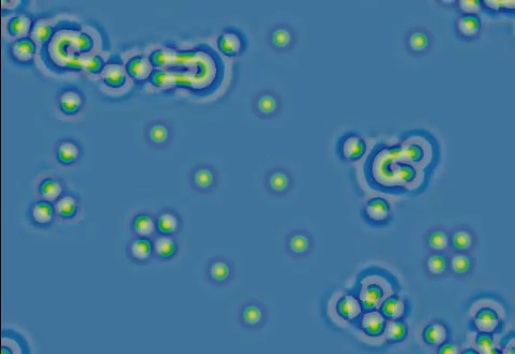 Initial pattern and coloring same as before

figure: parameter space with ι and X
This video is at X; Pearson's type ι is shown 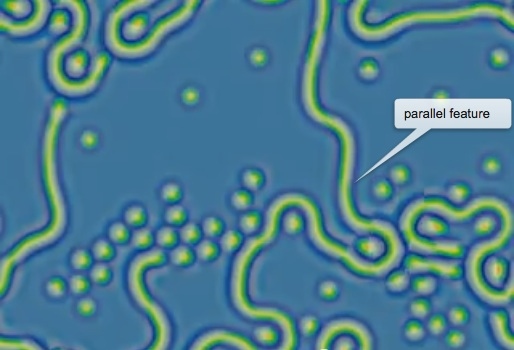 Initial pattern of spots (randomly chosen U<1, V>0) on solid red (U=1, V=0) background; coloring same as before 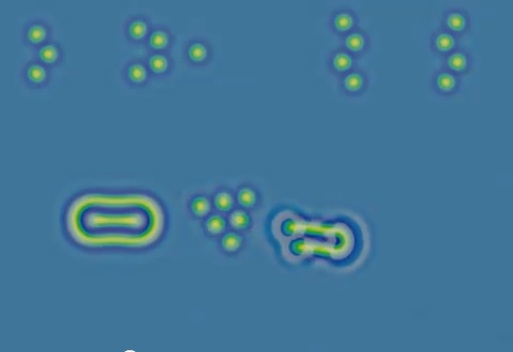 Coloring same as before 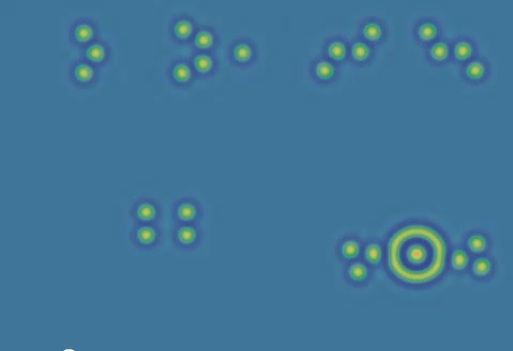 Coloring same as before

Stability analysis of another slow-rotating pattern

figure: a large collection of patterns

Most patterns were manually constructed from parts of naturally occurring forms

Note: Many of these are not yet thoroughly tested

- move in a straight line, if is has (only) bilateral symmetry

- rotate, if it has (only) rotational symmetry

- move on a curved path, if it has no symmetry at all

Relation to Other Work:

Relation to Other Work: Halos

(Note: Non-existence results of Doelman, Kaper and Zegeling (1997) and of Muratov and Osipov (2000) are not applicable because they concern models with a much higher ratio DU/DV )

— As parameter k is increased, leading end of double-stripe (shown) moves faster, but trailing end moves slower and the object lengthens; in the other direction (decreasing k) the reverse is true

— When these two speeds are closely matched, the U shape (shown) neither grows nor shrinks — why?

— Universal presence of other pattern types suggests this; parameter space maps should make it easy to find; nearby Turing effect is possibly relevant

— Shape of negaton "halos" is easy to solve 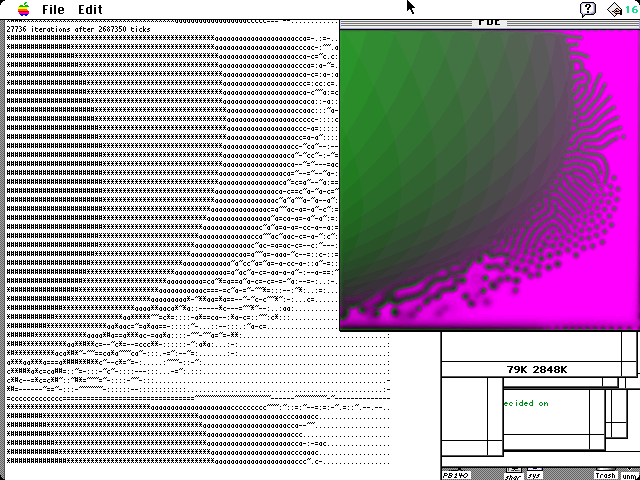 screen image of my Gray-Scott program in July 1994 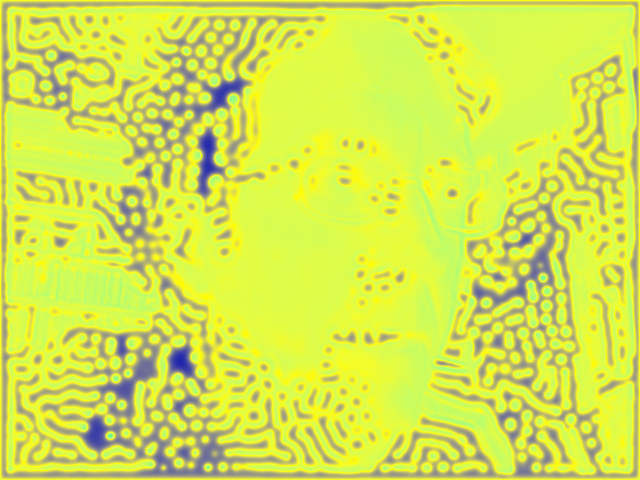 
This page was written in the "embarrassingly readable" markup language RHTF, and was last updated on 2020 Mar 26.