My Tokyo Unified worlds in Eden World Builder have a long history.

Soon after I started playing Eden, Mega City Tokyo (Extended) became my favourite world, I eventually adopted it as my own. I studied it a lot, and began making maps.

I found several old versions of Mega City Tokyo, and have reconstructed almost all of its history.

Prior to Eden version 1.5.2 (which was released on 13th September 2011), all newly-created worlds had randomly-generated terrain. If you wanted to make a "flat world", you could start by searching for a world someone else had made. I don't know who made this one, but it is the ancestor of all the Tokyo worlds. 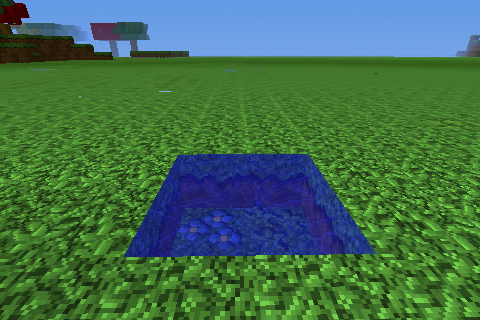 Flat world was made by starting with a non-flat world and blasting away some hills, and making a large floor of grass. It wasn't very big, but the creator of GIANT SHIP (see below) thought it was good enough.

One of the worlds that was created from "flat world" contained a wooden ship. 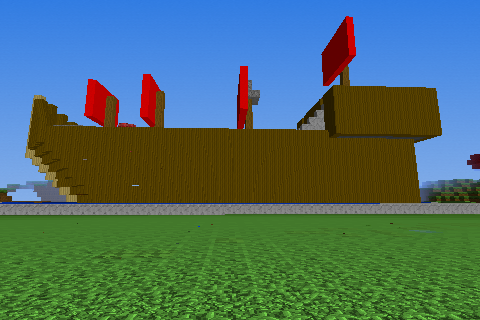 This world must have been on the "popular" or "featured worlds" list, because it was re-downloaded and copied many times.

When a world is uploaded, then downloaded onto a different device, and then re-uploaded, early versions of Eden would leave some information in the header (the first 192 bytes of the data file) from which it was possible to see the name and ID number of the original download.

If the ID number was known, a desktop computer could be used to download the world with that ID number from the Eden file server. (I figured this out by "snooping" on my own Wifi traffic while I downloaded worlds).

I eventually found a few other variants of the "ship". New downloads require a photo to be taken before re-uploading, so the copies show the ship photographed from different angles. 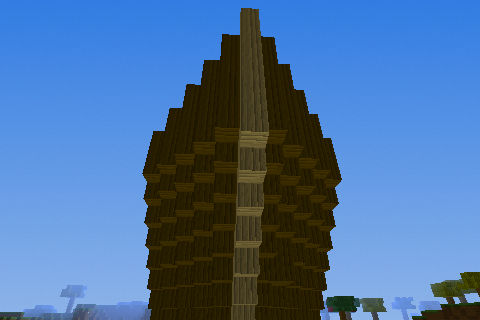 The one with ID 1316099587, called "Bst Ship ever by Niclas" is (I think) the least-modified of the various copies of the original GIANT SHIP world (which is now lost). 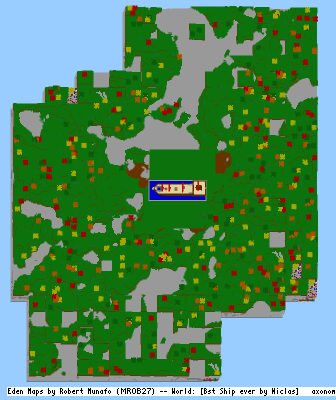 Map of "Bst Ship ever by Niclas"

Here are a couple later re-uploads: 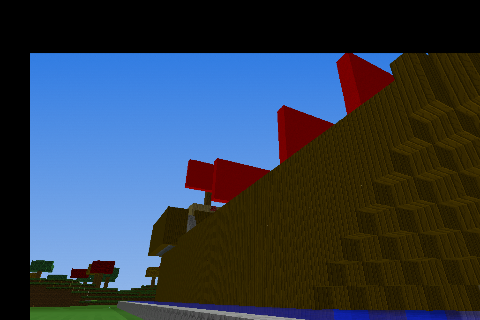 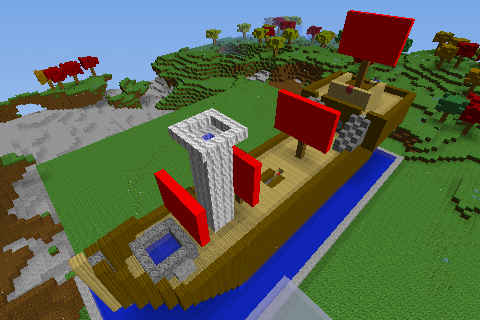 In "GIANT SHIP BY ALEX" a big white thing got added but the rest of the ship seems unchanged.

The very first version of Eden had a bug that caused worlds to become corrupted. When adding chunks to the terrain, the table of contents (ToC) would not get updated properly, causing the (x,y) coordinates of chunks and the file offsets to the chunk data to be wrong.

The following pictures are from a world called "houses skyscrapers airport stadium". This world is a "cousin" of the Tokyo worlds, because it is descended from the "giant ship" world, itself an "ancestor" of Tokyo.

It is one of many "Stadium" Tokyo cousins. They all have a football stadium with its centre circle built right over where the ship was, at the initial spawn point. 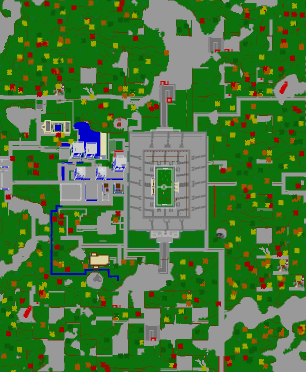 In this world someone built some roads all around the stadium.

To the north of the stadium is a road leading north, and marked by red sand are two sets of stairs that go down into an underground area. The red sand marker looks like a backwards "S" from above: 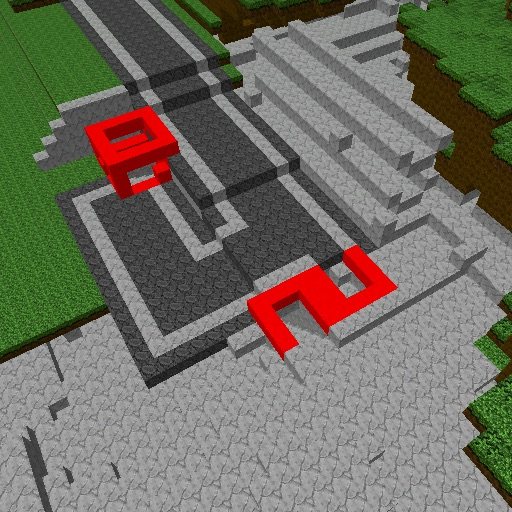 Original terrain. Note the positions of the red elements

When they were built, because of a corrupted table of contents (ToC), copies of the red structures (and parts of the staircases going down) magically appeared in two other places on the map. Two chunks containing red got copied.

The first copy is to the northeast: 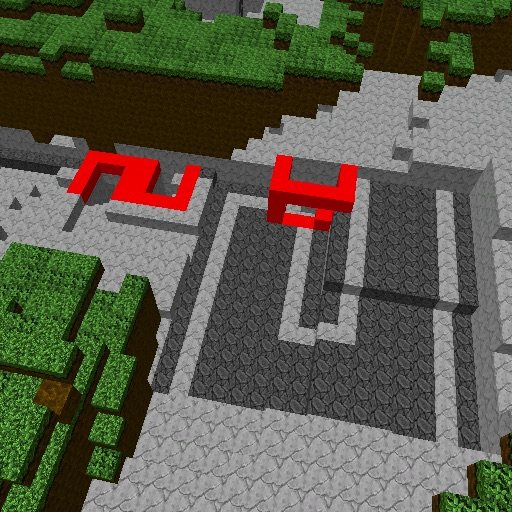 The other copy is south of the stadium, where the two copied chunks are further apart: 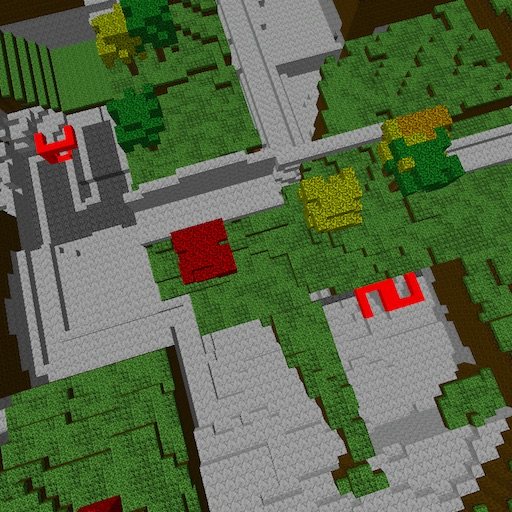 (One might also imagine that the red "S" was built before the scrambling, and that it got "duplicated" somehow as a result of a chunk table-of-contents (TOC) corruption. However, we see that this world has the same terrain everywhere as in the "giant ship" worlds, including trees in all the same places. All are derived from a common ancestor, and most did not have something built into the glith-chunk areas.)

All these early worlds also have a few chunks containing a large number of apparently random blocks. This pair of chunks, containing random blocks, is southeast of the stadium: 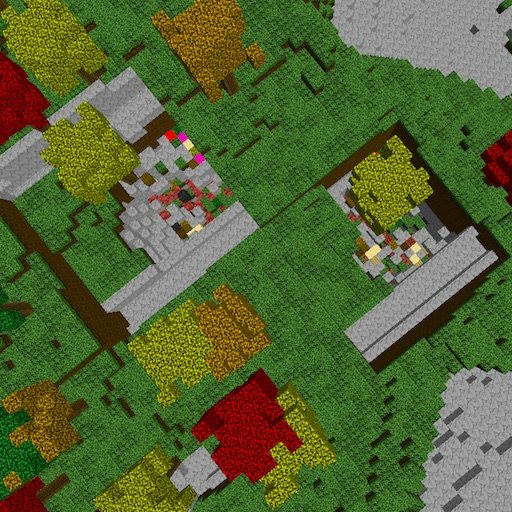 Glitch-chunks like these sometimes lack bedrock at the bottom, making it possible to dig (or blast) a hole that permits the player to drop through the bottom of the world.

As mentioned earlier, the first versions of Eden had a bug that caused worlds to become corrupted.

On or around the 12th July 2011, Ari set up a new server file index, and made all older worlds inaccessible. A few popular worlds were re-uploaded so they would still be available to players. The first three of these were:

Because of the "server purge", any worlds prior to 12th July 2011 cannot be downloaded, even when their ID is known.

Eden version 1.5 was a big change over the versions 1.0.x and 1.1.x that came before. Of particular interest for us was the addition of many block types, including the various "ramp" and "wedge" blocks, and clouds in generated terrain.

Unfortunately caves were made into an opt-in feature, and even if you chose to turn caves on, it only affected newly-generated chunks — any areas that had already been generated stayed unchanged. Even worse, the caves generated by Eden 1.5.x were much less interesting than before.

On the 7th September 2011 someone uploaded "houses skyscrapers airport stadium", a cousin of Tokyo (it has the same seed 115115 but is not a direct predecessor of superCITY). It is discussed above under the heading "The Chunk-Scrambling Savefile Glitch".

All Eden worlds had randomly-generated terrain using Perlin noise in three dimensions. Terrain generation is implemented as a subroutine taking as inputs the X, Y, and Z coordinates, plus a unique "seed" number. By using the same number throughout a given world, terrain is generated that is random, but reproducible: the subroutine produces the same terrain each time it runs with a particular set of (X, Y, Z) coordinates — even if running on different devices with different copies of the world.

This is the oldest surviving predecessor of the Tokyo worlds that is a "city" type world (defined as having skyscrapers and/or being named after a city or having "city" in the name). "superCITY" was uploaded on 7th September 2011. 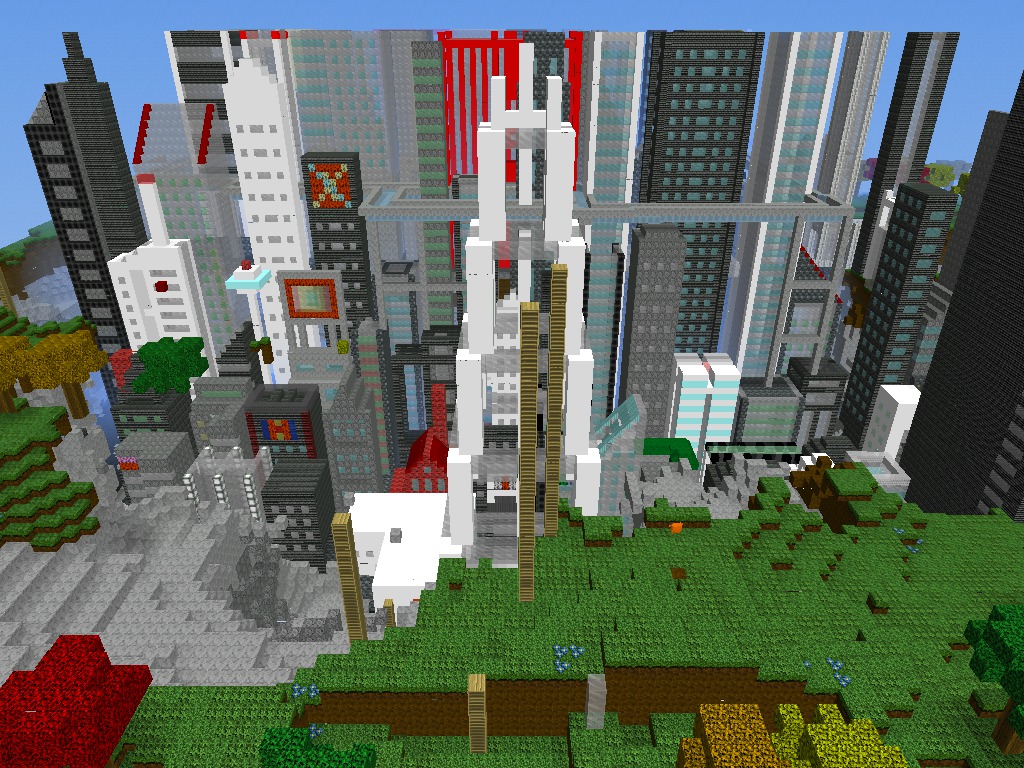 When you make a brand-new world, Eden always puts you in the "northwest" corner of chunk (4096,4096). Because of this, it is possible to locate the original spawn point of any world. It's under a building now, seen in this photo: 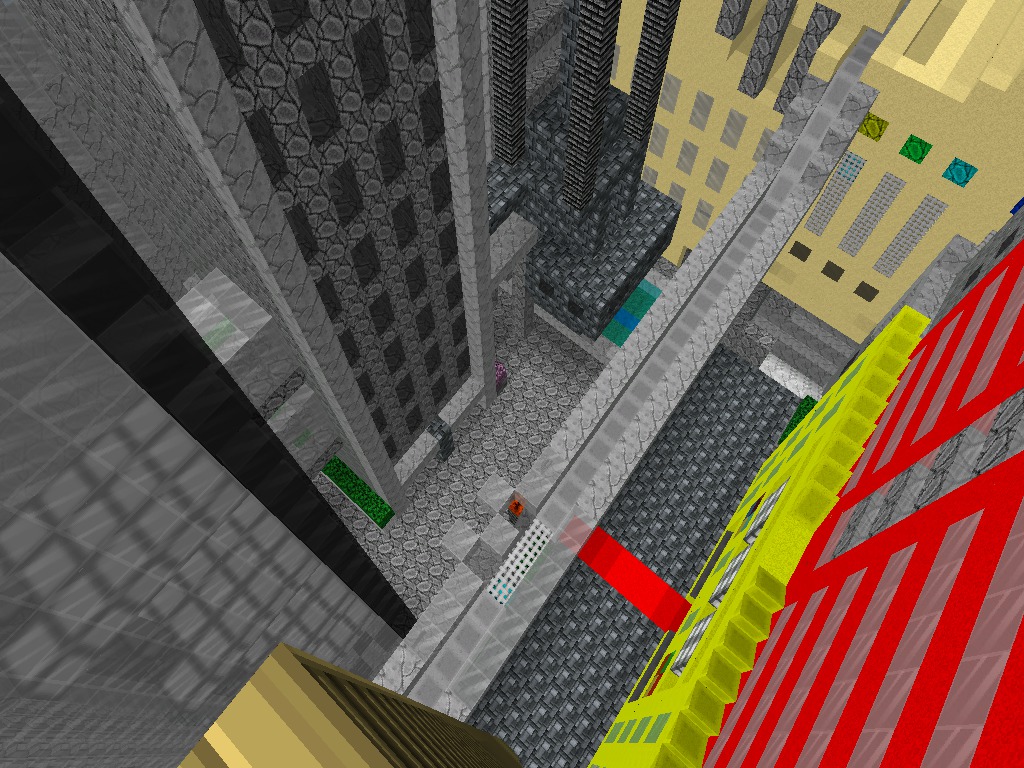 The original spawn point is under the stone/dark stone building. In most versions of Mega City Tokyo, if you go under that building you'll find most of the original grass and dirt is still there: 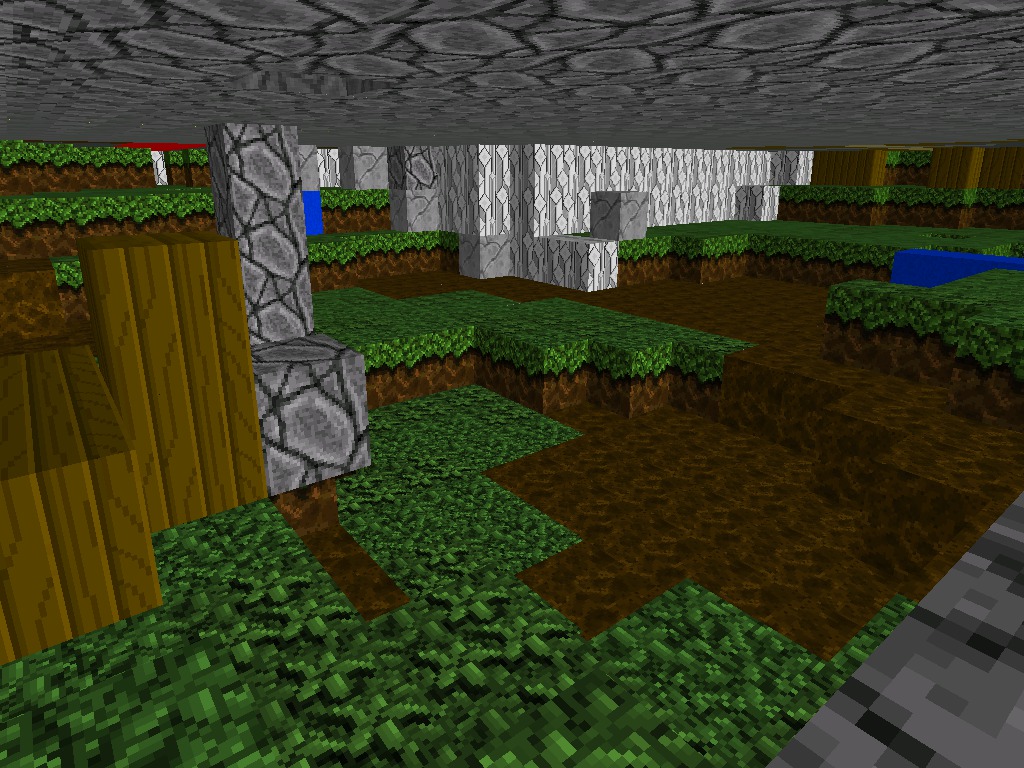 The original spot at which the the player spawned when creating the first world with seed 115115, remains largely unchanged in "SUPER city", just below street level.

There is a sand-colored building nearly (top-right of the photo above). Inside it is the word "Unko" made from dirt, and to the right of this, a bunch of dirt shaped vaguely like the poo emoji. 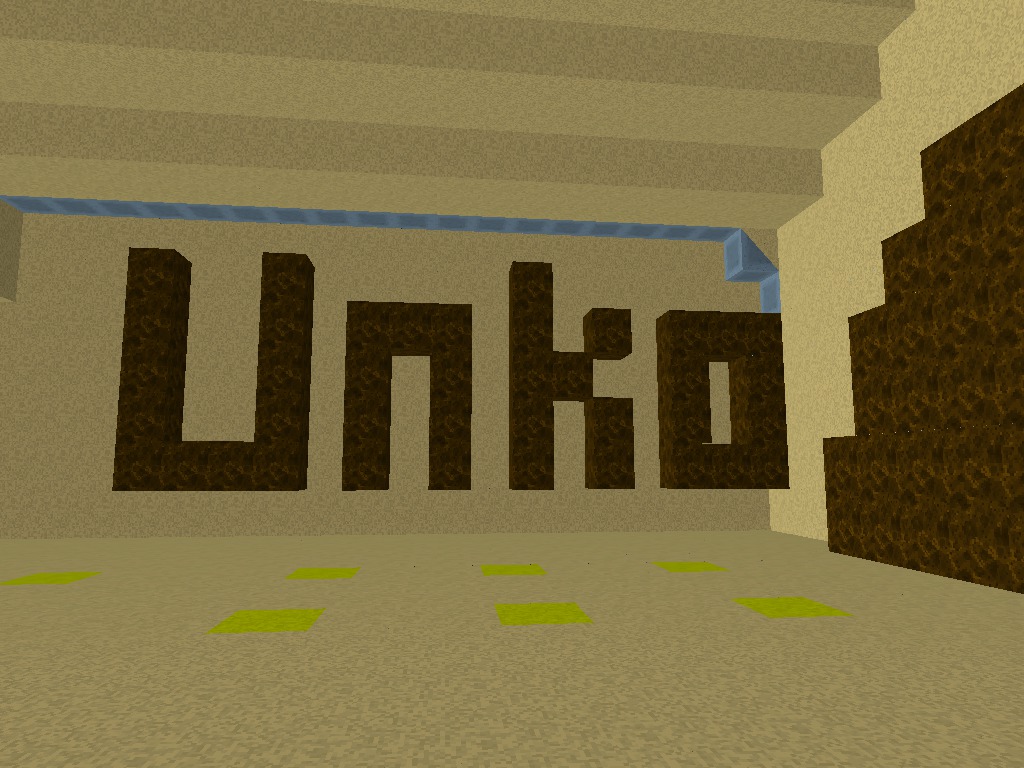 Unko (うんこ) means "shit" in Japanese. This building may foreshadow the Tokyo poop museum (Unko Museum Tokyo), but only by coincidence as it did not exist in 2011. This may be some odd signature of the creator; or possibly a reference to the 2011 film "Tokyo Unko". I chose a few similar Katakana letters as my nickname for the unknown creator of the Super City worlds: "リハスロ" (rihasuro).

When caves were made "optional" in Eden 1.5, they were also made a lot less interesting. The world "ALEX MACKAY CITY" is a Tokyo cousin that illustrates this.

I found good (not griefed or vandalized) versions of MEGA CITY TOKYO with the following dates and names (all shown below as maps):

The V14 version is notable because it is the version Djasiantech used as the basis of the world described on the wikia page MegaCityTokyo_(Extended).

The oldest published Djasiantech version is called "Small Dance Floor", with the date 11/06/2012. Here is its loading screen: 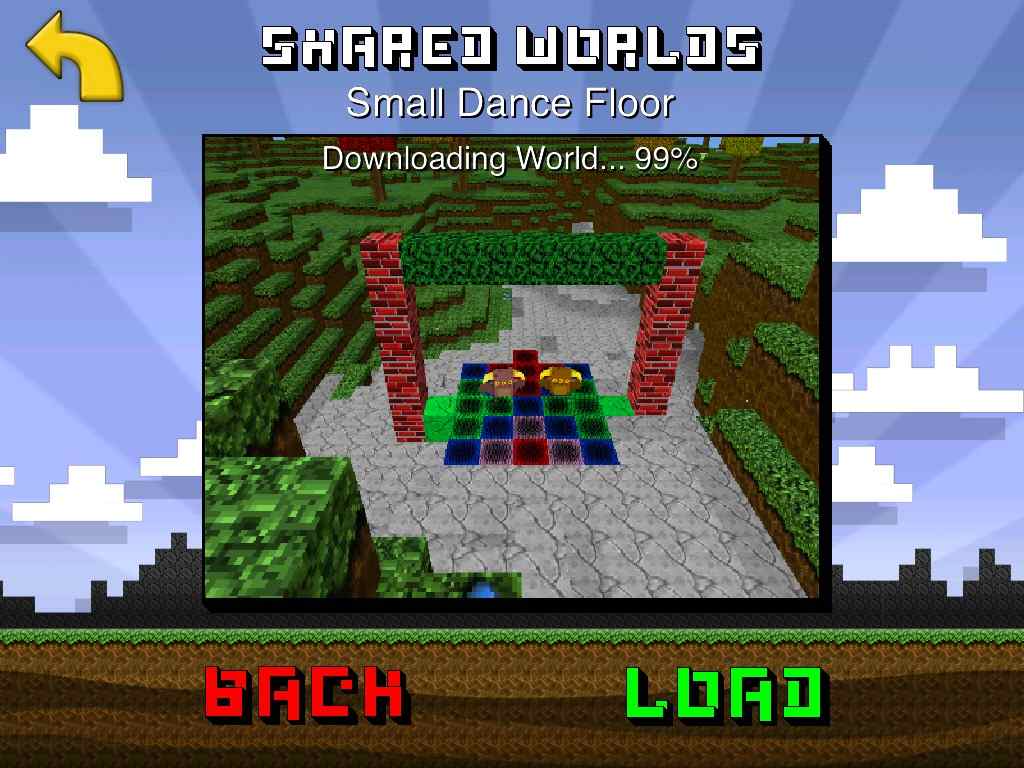 In this version, the famous Tokyo Tower has been built, but its district has not reached its present form. The Rainbow Bridge does not exist, nor anything beyond it. 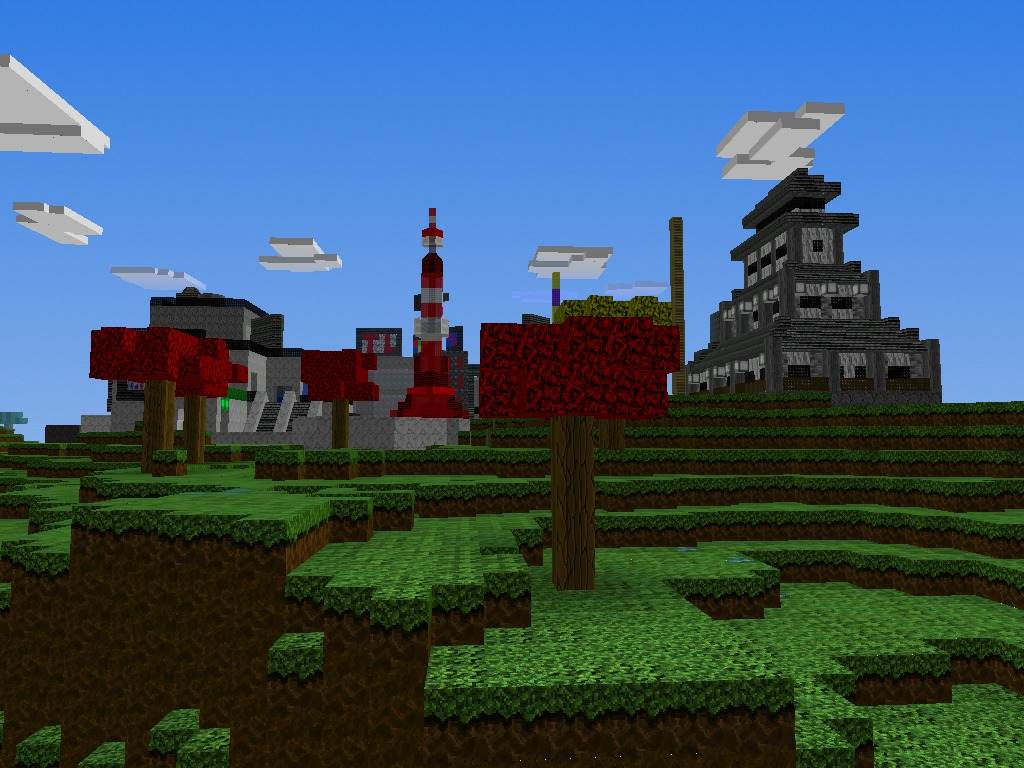 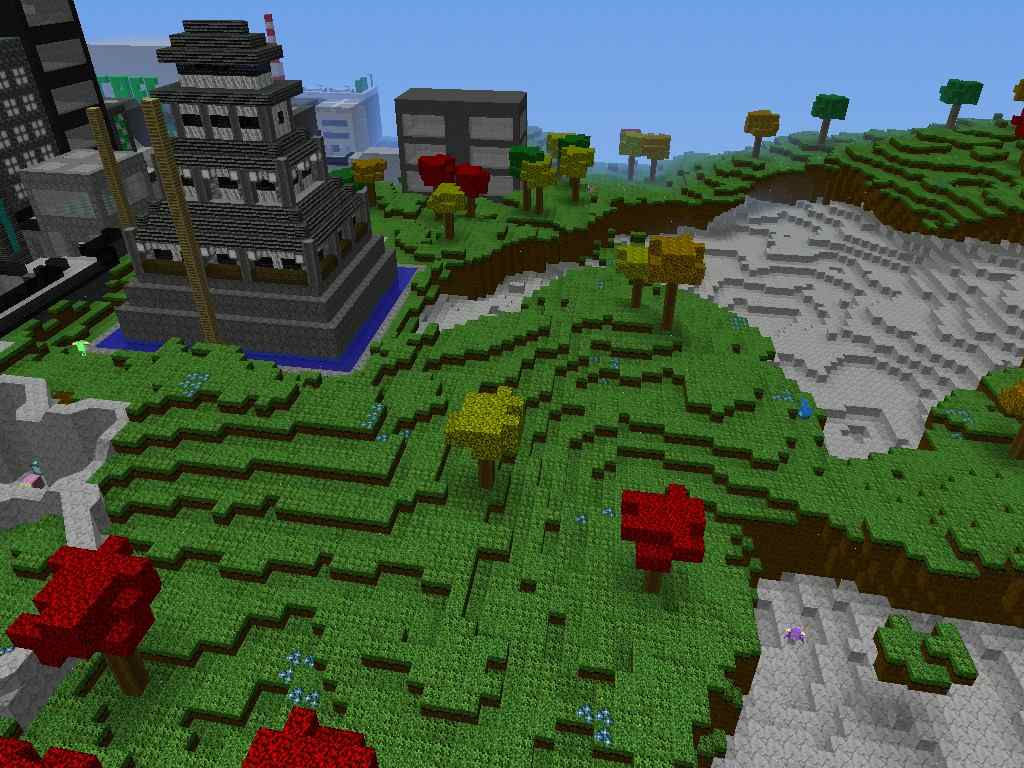 Floating island (lower-right corner) was removed when making the bay. 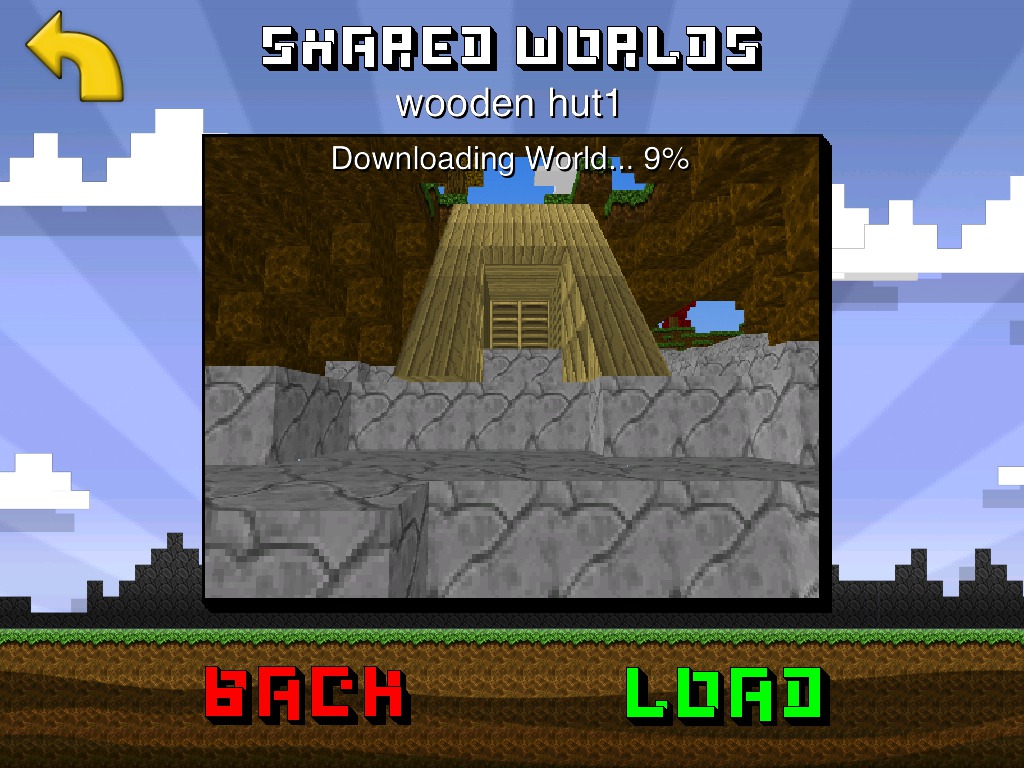 This world has many interesting things including an empty blue pyramid, Totoro but no Stumpzilla, and empty spaces where Korean plaza will be. One can see that much of Djasiantech's Tokyo was built to fit the existing terrain.

In all, I have found six major revisions by Djasiantech:

Here are maps of all the major versions, arranged in chronological order:

In these special maps, the buildings, grass and trees are drawn in black and white, with color added to show where blocks are added, removed, and/or changed, using the following color codes: 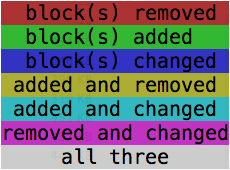 Color codes in my maps that show changes between two worlds

In the gallery, each version of Mega City Tokyo is compared to the version it was derived from.

After starting my own version of Tokyo (based on Djasiantech's "MEGA CITY TOKYO EXTENDED V3") I began making many changes to the existing buildings, expanding areas that I liked, adding "infrastructure" (like transportation via ice-slides and teleporters at bedrock-level), and adding many completely new buildings. I rebuilt many things that Djasiantech later added to their Tokyo "V4", and a lot of features from the "hidden underground" series and a few other old worlds derived from earlier versions of Tokyo.

Here you can see the central areas of Tokyo Extended being destroyed by meteors: Tokyo Meteor Apocalypse


This page was written in the "embarrassingly readable" markup language RHTF, and was last updated on 2020 May 13.